Is traditionally celebrated in January on the next Sunday after Epiphany (between 7-13th January), although here in Lower Peover it is celebrated on the last Sunday in January. Before farmers had their own ploughs, the communal plough decked with ribbons would be brought to the village church, where God’s blessing would be asked for the work that it was about to do. After the service, the plough would be paraded around the village, usually with dancing and stopping at every pub for refreshment! The farmers who were going to use it would give contributions towards the upkeep of the plough and to the church where it had been blessed. 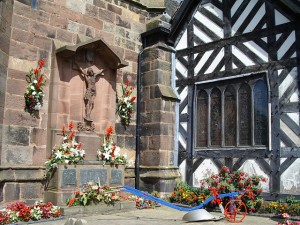 The plough outside Lower Peover church

The work officially began on the following Monday, but the teams would usually take the plough around the village, seeking contributions for a night at a local tavern. Tuesday was then spent in recovering from the resulting hangovers so the work wouldn’t actually begin until the Wednesday!

However times have changed. No longer do we, in England at least, still use village ploughs. Winter-sown cereals mean that few farmers, if any, start their ploughing in January but do it in the autumn instead.

In Blessing the Plough we remember that God is with us not just in our worship on Sunday but in all we do, including our work during the week as well, and it gives us the opportunity to pray for the farms and farmers of our parish our county, our nation and the world.