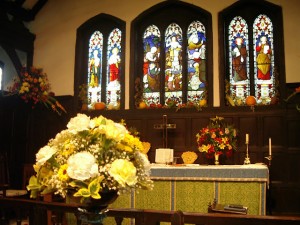 The altar at St Oswald’s decorated for Harvest

The word Harvest comes from the Old English word hærfest, meaning “autumn”. It came to refer to the season for reaping and gathering grain and harvesting crops. The full moon nearest the autumnal equinox is called the Harvest Moon. In Britain, thanks have been given for successful harvests for hundreds of years. Harvest festivals are traditionally held on the Sunday closest to the Harvest Moon. This is the full moon that occurs closest to the Autumn Equinox. It is a time to give thanks for the crops that have been grown and also to celebrate the end of the hard work and the long hours involved in harvesting them.

An early harvest festival was at one time celebrated on 1 August at the beginning of the harvest season. This was called Lammas, meaning ‘loaf Mass’. Farmer’s wives’ made loaves of bread from the fresh wheat crop. These were given to the local church for use as the Communion bread during a special service held thanking God for the harvest. 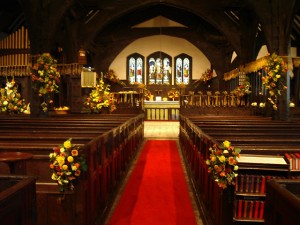 The modern British tradition of celebrating Harvest Festival in churches began in 1843, when the Reverend Robert Hawker invited parishioners to a special thanksgiving service at his church at Morwenstow in Cornwall. Victorian hymns such as “We Plough the Fields and Scatter”, “Come ye Thankful People Come” and “All Things Bright and Beautiful” helped to popularise his idea of harvest festival and spread the annual custom of decorating churches with produce for the Festival Service.

As British people have come to rely less on homegrown produce, there has been a shift in emphasis in many Harvest Festival celebrations. Increasingly, churches have linked Harvest with an awareness of and concern for less well off people in the community. Produce from the Lower Peover Harvest Festival goes to The Salvation Army. 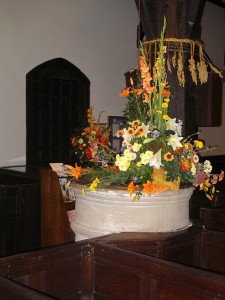 The font at St Oswald’s decorated for Harvest

At Lower Peover as befits a rural setting it is a long-standing tradition that the church be decorated for the Harvest Festival services. A further important part of this tradition is the Parish Harvest Hot Pot Supper held prior to or following the annual thanksgiving service. This meal though being held with a little less revelry and a little more decorum than the historical accounts indicate of the events following Blessing the Plough Sunday services of long ago.